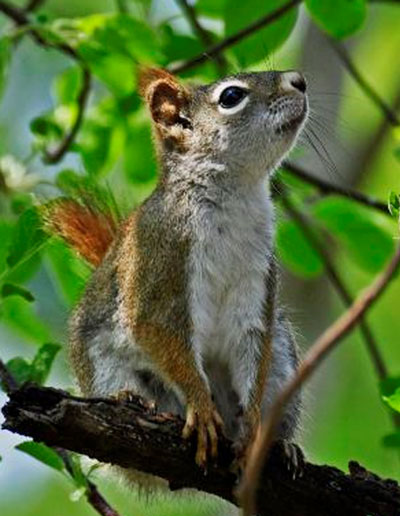 
The red squirrel is a very solitary little creature.  In fact, each red squirrel takes it upon him or herself to defend a territory that ranges in between two acres and five acres.  Not only are they defending the territory from other species of squirrels, namely grey squirrels, they are also defending from other red squirrels.  As you can thus imagine, these squirrels are considered quite aggressive, certainly more so than the rather shy gray squirrel.  Although they are quite small in size, they are well known for taking off after the significantly larger grey squirrels, especially if they infringe on their territory.  They are, however, much like grey squirrels, because they eschew hibernation during the winter months and instead remain quite active all throughout the year.  However, they do not like extremely harsh and inclement weather, and so have been known to seek shelter and remain there during particularly intense storms.

A red squirrel, all told, is approximately half the size of the larger grey squirrel.  Reds rarely measure much more than somewhere around twelve inches, from their noses to the tips of their tails.  They seldom weigh more than five or five and a half ounces.  During the summer months, the red squirrel's fur is actually a bit rust colored – it is a brownish red shade when tends to fade into grey a little bit during the winter months.  Its underbelly is white.  Also during the summer, the squirrels will have a pronounced stripe of black fur going up its sides; it typically separates the white underbelly from the rust red upper side.  In this species, the females and the males tend to be pretty much the same size.

The red squirrels are unique in that the females go through two breeding seasons.  They breed from March until May, and then again from July until September.  Their gestation period lasts for forty days, at which point they give birth to a litter which contains anywhere from three to six baby squirrels.  They are hairless when they are born.  They tend to develop quite slowly.  The young stay with their mothers over the course of the summer. 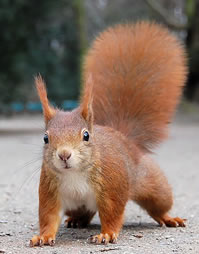 Red squirrels are also similar to grey squirrels when it comes to their nesting habits.  Unlike grey squirrels, however, the reds prefer to nest in conifers.  They make their nests out of shredded bark.  They tend to construct them in trees that have either fallen or are hollow.  Holes in the ground, hummocks, and the crotches of tree are popular nesting spots as well.

Part of the reason red squirrels are so territorial is because they store food in their area, in a central location.  Typically, a red squirrel will use a brush pile, a hollow log, or a chamber hidden underground to store their food.  These squirrels also have a bit of a sweet tooth, and sometimes tap into sugar maple trees, so that they can harvest the sugar that is located in the sap.