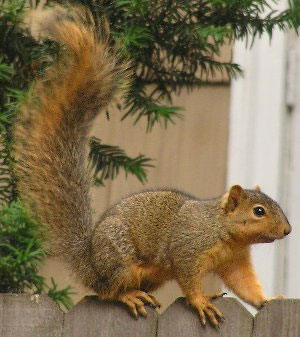 
The fox squirrel, also known as Sciurus niger, is the only species of squirrel – of tree squirrel, specifically – which makes its home in the wide, wide Great Plains. The fox squirrel gets its name due coloring, which some people refer to as ‘rufous’. That is basically a color that incorporates strong shades of red along with undertones of orange and a yellowish kind of pink. To be sure, in color and more, the fox squirrel is certainly one of a kind. Not only does it thrive in the Great Plains, the fox squirrel can also be found in the eastern portion of the United States. It is notably absent from New England, however. It is well represented closer to the west coast as well, especially in Montana, Idaho, Oregon, Washington State, and California.

Fox squirrels live in close proximity to grey squirrels, otherwise known as Sciurus carolinensis. Their habitats overlap the most in the eastern portion of the Great Plains, which has a lot more forest and vegetation. If you cannot tell them apart by the colors of their upper bodies, their underbellies should make it quite easy: grey squirrels have white underbellies, while fox squirrels have reddish orange colored underbellies. Furthermore, fox squirrels themselves, however, appear to prefer locations where the trees are rather farther apart.

Fox squirrels particularly love walnut trees. In fact, walnuts are among their favorite foods, along with pecans and acorns. Fox squirrels are typical squirrels in that they gather as many nuts as they can when they come across them, and bury them safely in the ground. They come back to dig up the nuts later, when they get hungry. In this way, as it happens, fox squirrels are a terrific source of “reforestation,” if you will, because a lot of the time they never find the nuts they have buried. This, of course, leads to the growth of new nut trees. 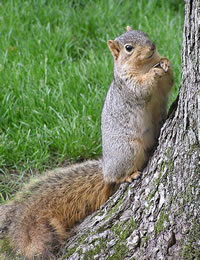 Fox squirrels have developed a very broad appetite. They have a rather gourmet palate. When nuts are not available, they will happily feast on flowers and their buds, as well as young leaves and even seeds, specifically those which come from the fruit on the Osage orange trees. They are true omnivores, because they have also been known to eat insects. Not only that, but fox squirrels are also not above robbing the eggs from temporarily empty bird nests.Fox squirrels tend to be even smaller than red squirrels, which are quite tiny themselves. On the average, a fox squirrel will weigh somewhere around three pounds. They are not very long, either; they tend to measure ten inches or so from their noses to the tips of their long tails. For fox squirrels, breeding starts in January. The female begins to build a nest at this time, usually in hollow trees. They have anywhere from one pup to six pups; three is the amount found in the average litter.